Each quarter, we ask 2,100+ UK employers about their hiring plans for the months ahead. We ask if they plan on recruiting additional workers, reducing the size of their workforce, or maintaining headcount.

In the results for Q2 2019, we’ve found that hiring intentions in the public sector are cautiously optimistic, and that headcount will increase in the months ahead. In fact, this is one of the few times over the last eight years that confidence in the public sector matches that of the private sector. This is particularly noteworthy, as this time last year the results were quite the opposite – more public sector employers planned to reduce the size of their workforce than increase it.

These findings mirror the positivity that has been reported by the Institute for Government. Between 2010 and 2016, the civil service shrunk by nearly one-fifth, reaching just 380,000 at its smallest point in June 2016. However, headcount has begun to rise again over the last few years, and as of the end of 2018, there were 404,000 full-time civil servants in the UK. 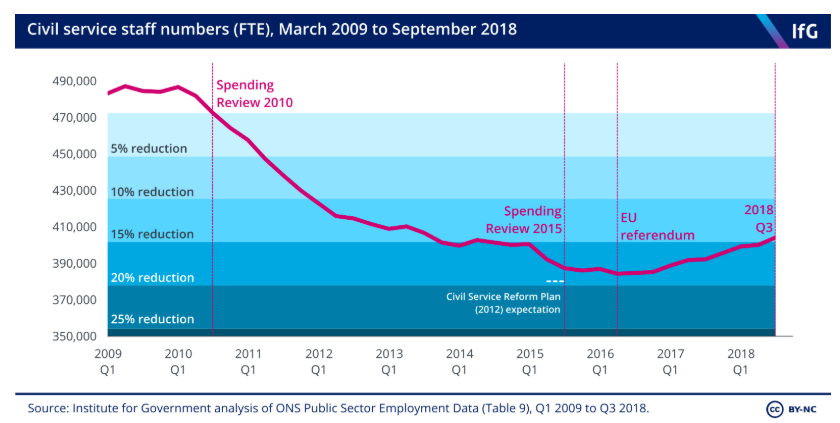 We can see this trend for headcount growth elsewhere in the public sector too. All hiring freezes are off in the emergency services; the NHS has more vacancies today than any point in the last three years; and local authorities are investing in well-publicised recruitment drives to fill huge volumes of vacancies across the UK.

Brexit is bound to be fuelling some of this hiring, as Government departments ready our plans for withdrawing from the EU. However, after so many years of austerity, these positive hiring intentions may also demonstrate that investment is reaching where it’s needed most.

It is worth noting the ManpowerGroup Employment Outlook Survey does find that hiring intentions in the public sector have dropped slightly compared to the beginning of the year. This may reflect that some public sector employers have had to take their foot off the accelerator slightly, due to ongoing Brexit uncertainty. Nonetheless, the sector remains in positive territory and the public sector as a whole plans to increase headcount in the coming months.

Competing In a Tight Labour Market

We all know that it’s a competitive jobs market. Both employment and job vacancies have reached record highs, meaning that there are just 1.6 jobseekers per vacancy. This is the lowest proportion since records began. In the private sector, employers can (theoretically) put their hands in their pockets and increase wages, to secure the best talent. But in the public sector, it’s not that clear cut. Employers must think more creatively about how they position themselves as an employer of choice. They may plan to recruit in significant numbers in the months ahead, but these plans will only come to fruition if they have a compelling workforce strategy that aligns with the expectations of the people they want to attract.

One of the approaches that some public sector organisations are taking is to invest in a Project RPO. Across Government functions in particular, they’re partnering with a recruitment provider like ManpowerGroup, who supports with some (or all) or their hiring requirements – such as recruitment strategy, sourcing, assessment, selection, compliance checks, and more. It’s often focused on one specific skill, geography or business unit, and is designed to address a specific business need for a large-scale ramp up.

With a Project RPO, you get all the benefits of a full-scale outsourced solution, but without any of the extensive contractual commitments. You can have a dedicated team, white-labelled delivery, scalability, flexibility and more. In short, it gives you the agility you need to quickly recruit large volumes of people and plug any holes that exist in your recruitment process, but without the long-term commitment.

It’s great to see that the public sector is positive about recruiting in the next few months. If you’re a public sector employer that’s interested in learning more about how ManpowerGroup can support your hiring efforts, please don’t hesitate to reach out.

Emma Burgess
Emma has designed and delivered innovative solutions to address talent based business challenges across the wider public sector for over twenty five years, working with Government, the NHS, Local Authorities, Blue Light and across the third sector. Emma has worked for three industry leaders during this time, including ManpowerGroup - where she has spent the last six years developing models which allow the public sector to maximise business benefit through solutions that include Recruitment Process Outsourcing, Managed Service Programmes, Talent based Outsourcing, Strategic Workforce Consulting and Talent Based Solutions.
Search The Word on Work

The Word on Work

To send us an email, please fill in our contact us form.